I just read a blog by Jeff Bullas covering the world’s 10 most popular Company Facebook pages. That lead me to thinking which are the top 10 pages in South Africa.

It is very interesting to note that there is only one company that features in the top 20 overall in South Africa.  The rest are all musicians, celebrities or sports teams.  I was stunned to see that Cell-C didn’t make the top 10, languishing with just under 5000 fans. If the list tells us one thing it’s that there is real estate to be claimed by companies and brands that think quick and act social. Where are the big tech companies? Vodacom just makes it in while MTN lags far behind. 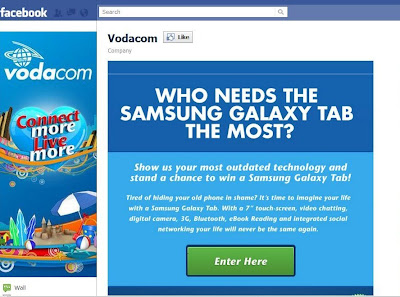 Vodacom has a huge community (40+ million customers throughout Africa) and are definite contenders one feels that they would have done a lot better building their Facebook presence. Their landing page presents a great call to action with the possibility of winning a Galaxy Tab. 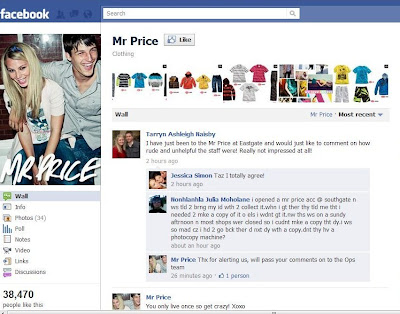 This page is doing well considering they have no “call to action” buttons on their page.  Their landing page is the wall, not necessarily a bad idea but the first thing I saw were complaints about rude staff.  To their credit Mr. Price responded quickly.  It would be a better idea to land visitors on a page that presents a better idea of what they offer. Being in retail they could do a lot more to encourage engagement through incentives. 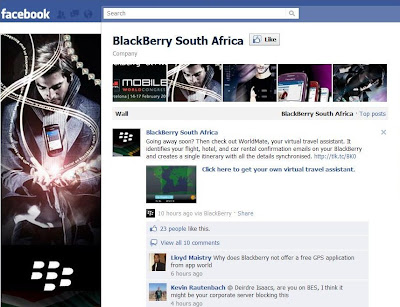 With Blackberry’s domination in the South African smart phone market it is not surprising that they would be up there. There is very little in it for the last three places in the top 10 with just 4000 fans separating these three.
7. Discovery Vitality (45,467 fans) 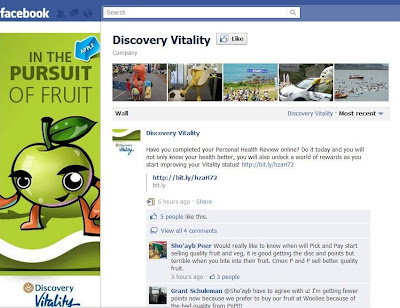 With this many fans they must be doing something right.  However there is no clear indication when you get to the page what you are supposed to do with it.  The landing page is the wall with posts from numerous customers – both compliments and complaints. There is a “tell us your story” tab which has a image that links to their website but no clear “Call to Action” buttons.
6. www.rentaskilldirect.com (46,558 fans). 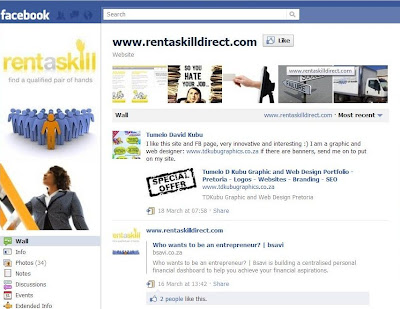 I wasn’t even sure that this one should count.  I had never heard of it.  It’s basically a place to list (advertise) your skill and hopefully get work.  More power to ’em.
5. Doritos South Africa (47,335 fans) 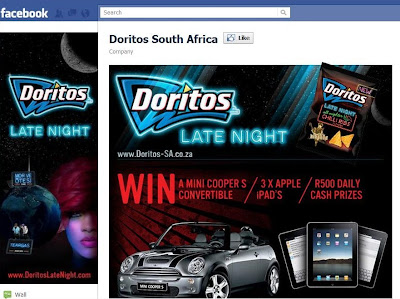 This is a fantastic page – great call to action with a competition on their landing page.  Their wall is filled with customers engaging with the brand.
4. Woolworths (72,431 fans) 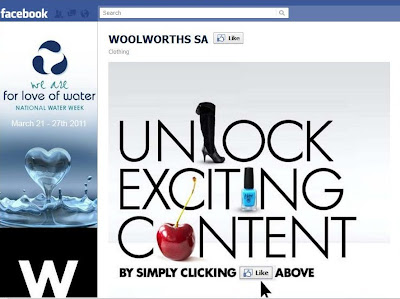 There are only 13,000 fans separating the top five. But in 4th position Woolworths is 25,000 fans ahead of Doritos so they’ve done something very right. Great page, great incentives and great engagement.
3. 5FM (87,301 fans) 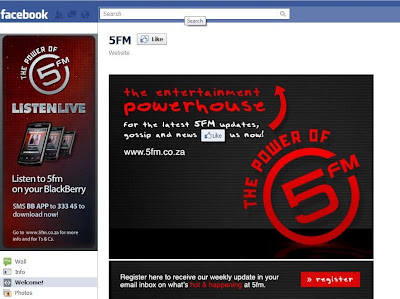 5FM have been defining youth culture since I was a youth and so they continue. They have used social media very well but I am surprised they find themselves behind #2 on the list.  I have a suspicion that this has got to do with fears of diverting traffic from their very well developed website. A well thought out strategy of tighter integration between their website and their social presence would soon get them challenging the number one spot.
2. Huisgenoot (140,487 fans) 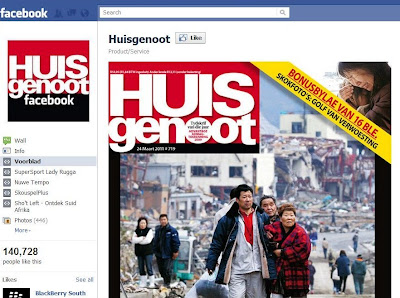 Beating third position by a whopping 53,000 fans Huisgenoot has capatalised on its large and loyal readership and extended it’s community very well onto Facebook.
1. Nando’s (568,333 fans) 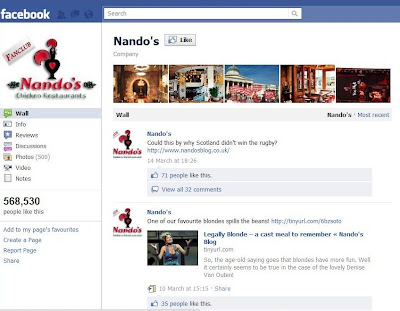 The out and out winner by a lap or three is Nando’s.  They’ve always made great use of their marketing spend and I’m sure it is their adverts, which are featured on their page, that have drawn the fans.  However one complaint: They have allowed the page to be hijacked by spam postings and there doesn’t seem to be very active engagement – a posting every few days.  Perhaps they’re waiting or their next big campaign.
Which companies do you feel are conspicuous by their absence? Let me know in the comments.
Source: www.famecount.com was the source for much of the information in this post.  However, for reasons I couldn’t decipher Vodacom was not listed on this site. This means there may well be discrepancies. Please let me know of any.