Oscar comes to the wedding industry 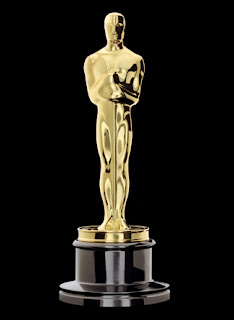 So, the Oscar type awards event has come to the South African wedding industry.

It’s a very clever idea.  The wedding industry in South Africa has exploded and it is now a multi-billion rand enterprise. A group called the South African Bridal Industry Academy (SABIA) started a couple years ago and positioned themselves as the industry authority.  Suppliers become members and it gives the general idea of legitimacy to an otherwise unregulated industry.

SABIA started an awards programme to acknowledge those who do very well.  Results are based on nominations and votes from brides.  Every supplier from the florists, the cake makers, bridal shops and of course celebrants are included.  You don’t necessarily have to be the best but you must be the best at getting your brides to vote for you.

If you are among the winners AND you are also a member of SABIA you get great exposure which makes membership an incentive. These awards were known as the “VOW Awards” but have now been re-branded as the far more sensible “Brides Choice Awards”.

I found out about this in May.  Nominations were to close at the end of June so I had around 6 weeks to get as many of the brides I’d married in the last year to log on and vote.  It went surprisingly well and I received fantastic support.

After the results had been verified and audited (I was told there is a very strict procedure for this) I was informed in July that I had placed in the top 3 but  final winners would be announced at a gala dinner  in Cape Town on August 19th.  Great. A flight to Cape Town, a night of accommodation and a R700 ticket to the event to find out if I had won!  Despite this I got into the excitement of it all.

I approached the event in a very nonchalant manner.  I mean top three is great, right? I thought the trip would give me the opportunity to meet others in the industry and get a generally feel of what is going down, whose who and from there plot my future. 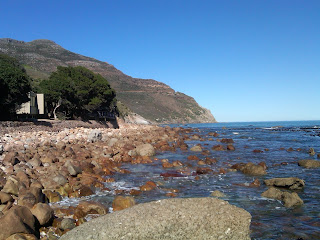 It is very fortunate that I know the owners of Tintswalo Atlantic a shoreline lodge in Hout Bay and they were gracious enough to give me a night at their lodge.  And I must note here that this is probably the best hotel I have ever stayed in.  It was simply superb and in my opinion a must for anyone visiting Cape Town.

Finally the time for the event arrived.  Held at the Vineyard Spa & Hotel in Newlands it seemed posh enough with champaign at the reception and the soft hum of muted conversation by small groups of people that know each other.  I was duly given my name tag. And surely there is a better system than walking around with a name tag that everyone is really too embarrassed to stare at and read.  I took mine off only to have Alysson Watt, SABIA’s head honcho and organiser, come over and put it back on.  And of course a few people standing awkwardly on their own desperately hoping their Blackberries would do something to distract them from the awkwardness. I found myself in this last collection of people.

I was struck by the fact that not one attending industry supplier was black or indian.  It is a clearly white dominated industry – something that will surely need to be addressed.  (But, by whom?). It would also seem that Afrikaans women have a dominating presence.  I was impressed by this. 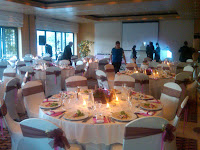 Thankfully we were finally called into the banquet room.  There were approximately 15 round tables with each seating 10 people.  The room was mocked up very much like a wedding.  Sitting at my table were decorators from Pretoria, venue owners from Bloem, a businessman backer of SABIA and a florist from Cape Town.  After a muted start our conversation got more animated.

It took ages to start but once it did the awards rolled very quickly.  I looked down the programme and saw that my category was about half way through the first batch of awards (those being given between starters and the main course).  Without warning I became nervous and for the first time realised that I really wanted to win this. Wow! In each category the bronze, silver and gold winners were announced.  We arrived at the “marriage celebrant” category and with what seemed liked little pomp I was announced as the silver winner.  No bronze or gold winner was announced.  I headed up to the podium, got my picture taken and made an impromptu speech and headed out of the room to have another picture taken.

And that was it, I was done. The questions swirled: Who was first? How much did I lose by? Who came third?  Why weren’t the others announced? Turns out the other two winners were not members and they were not present so no big announcement for them!

The event was not without its embarrassing moments with one venue being announced as the Gold winner only to immediately be told “No, sorry it’s actually Silver”. Ouch.  And Alysson pretty much ran the event herself – presenting and then running over to the laptop and projector to get the next slide presentation ready and running back to the podium.

But despite this it was a very well run event and one which I have no doubt will grow in stature and import.

It’s a lot of fluff and PR but fabulously enjoyable and I will no doubt work harder to get into first place next year! A very special thanks to all the couples that I worked with in the last year and if you nominated me I am exceptionally grateful!