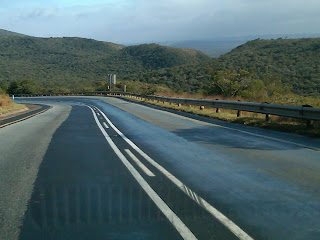 An Epic journey it was.  5 days, 3000kms traversing 5 provinces so I could marry a couple who live just 20kms from my home in Joburg!

I received a phone call from Glynnis about 6 weeks ago asking if I would be available for a wedding in Plettenberg Bay.  I was driving at the time and I instantly said “yes”.  I loved the idea of  taking my wife for a road trip and a long weekend away.  The date was set for the 8th of August 2010.

Glynnis is a wonderful singer who performs at Jewish weddings.  The couple, Richard and Jenny, were planning to have a lot Jewish tradition even though Richard is Catholic.

It was only on the weekend before the wedding that I sat down and planned the trip and realised,, to my horror, how far Plett actually is and what this would land up costing me versus what I had charged.  I hurriedly tried to arrange to fly down in stead.  Too late – with the long weekend there were just no flights available.

I resigned myself to this long trip.  We would leave Friday and return on Monday.  Jenny’s mother, Barbara had kindly agreed to put us up at a local villa for 3 nights.

Melissa and I planned to get an early night and get up at 3.30 and hit the road by 4am.  This worked accordingly to plan except for the early night.  With the anticipation of the trip we couldn’t sleep and by the time we hit the road we’d only slept for 3 hours.

I’ll spare everyone the play by play details of the journey down.  In summary we went to PE for a day where I paid R800 for the wrong mechanical problem but despite that we arrived in Plettenberg Bay on Saturday evening, thoroughly exhausted. 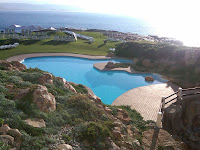 One amusing anecdote – we went into “downtown” Plett to get some dinner.  At random we decided on “Ghilies” which promised both sea food and steak.  As we approached I noticed the place was deserted, not a single table was occupied. The manager approached and when asked to be seated he says, totally straight face “I’m sorry, we’re totally booked out.”  It was all Melissa could do from bursting out laughing.  I assume the rush of guests would arrive in due course.

We woke to an amazing day on Sunday morning and headed to the beach to catch the sunrise which was just fabulous.  It bode very well for the 4.30 wedding. 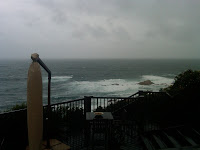 At lunch time the wind picked up and by 2pm it was overcast and decidedly gloomy.  We left for the Plettenberg Park Hotel at 3pm and when we arrived it was raining and *very* cold.  I couldn’t believe how the weather had changed in such a short space of time.

Rather uniquely all male guests were given a yulmulka inscribed with the couple’s name and the date.

The Plett Park hotel is beautifully situated on the rocks overlooking the ocean.  During clear weather the view must be breath taking.  During the cold rainy weather I found it starkly awesome.

Shortly after 4.30 the wedding began.  The Chupa was crowded with Groom, Bride, mother and father of the bride, bestman and 4 pole holders as well as a ring bearer and flower girl.  Then of course me to preside and occasionally the Chazan to sing blessings.  This made for lots of gentle shuffling about.

I loved the ceremony.  The singing was magical and clearly both Jenny and Richard were enjoying it.  It was never sombre but rather light with humour and love.  Quite uplifting!

Afterward we all scurried to our cars and made for the White House – a restaurant in the centre of town which hosted the reception.  The food was scrumptious, the wine smooth and the speeches surprisingly delightful.  Melissa and I sat with the person who did the flowers and clearly it had been a stressful week for her!

We finally took our leave shortly after 11am.  We fell asleep almost as soon as we hit the pillows!

Monday morning (public holiday) was another two hour drive back to PE where we spent another day.  On Tuesday we began and concluded the marathon drive back to Joburg.

Was it worth all that effort?  It always is.